Guns In Apartments: What Landlords Can And Cannot Ban

Home / Guns In Apartments: What Landlords Can And Cannot Ban 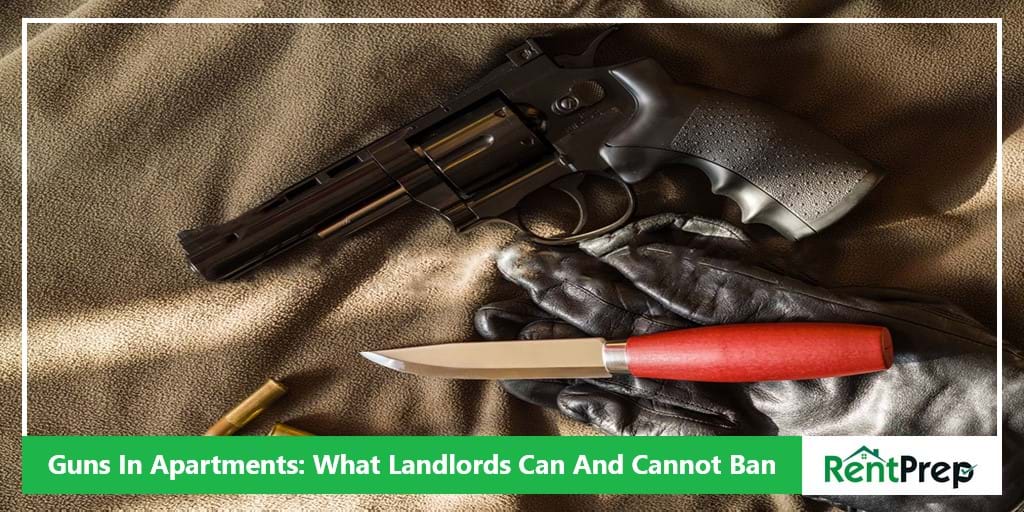 There are a lot of things in the world that can be dangerous when used improperly. Something as simple as an oven to a more obviously dangerous item like a gun can be risky to have around the house, but that does not necessarily mean that a landlord is allowed to ban them.

With changing opinions in the current political climate, many landlords and renters alike are left wondering whether or not guns are allowed in apartments. Can landlords ban guns if they do not want them on their property, or is that illegal?

These questions are very important to answer, and the answer is going to differ depending on where your rental properties are located. Let’s take a closer look to give you the complete picture.

A Table Of Contents For Guns In Apartments

The rules surrounding whether or not guns are allowed in rental properties is complicated.

Rental properties are considered to be private property owned by the landlord, which means that they can make a choice about whether or not guns are allowed. When that private property is leased to a tenant, however, the landlord gives up some of their ownership rights in exchange for a rental fee.

Where does banning guns in apartments fall in the range of what is allowed and what is not allowed to be controlled by the landlord?

It’s Up To The States

Most landlord-tenant law issues, including this one about guns, fall to state law rather than federal law. This means that every state is going to have its own set of rules, so you will want to be sure that you look these up for your area.

At this time, there are only a few states that explicitly mention gun ownership for landlords and tenants that are living in one of their rental properties:

As you can see, there are a lot of states that don’t yet have specific laws about whether or not landlords can prohibit guns.

Most states do have some type of regulations about carrying laws, however, and taking a closer look at those rules can help you understand what you can prohibit and what you cannot prohibit.

If There Is No State Law

Even though the Second Amendment allows people the right to bear arms, individual property owners of rentals, stores, and other establishments are permitted to create gun-free zones as permitted by state regulations. This means that landlords are permitted to ban guns if there are no state laws stating otherwise.

What Leases Should Say About Guns In Apartments

While you are permitted to ban guns at your properties if your state allows it, that doesn’t mean that you have to follow through with a complete ban. Many landlords choose to ban openly carrying guns in common areas by including this in the lease or they added provisions that only allow those with proper licensing to carry a gun at the property.

Ultimately, it is up to you to decide what you want to happen on your properties as long as you are within state regulations.

The key to whatever you decide to do about guns is to include the information clearly in all leases before you sign them. When you have clear terms about something as complex as gun ownership in your lease, it will be easier to keep things under control or defend your position in a court setting if you should need to do that.

Think about what your concern is:

As you work through your answers to these questions, you will be able to gain a better sense for why you would consider a gun ban and what your priorities are regarding guns at your rental properties. With this information, craft the lease that will protect those priorities.

Are you allowed to have a gun in your apartment? Yes, you are, as long as your landlord has not forbidden it. Most states allow landlords to make the final call about whether or not their rental property will allow guns, so you will need to follow those guidelines.

Landlords, remember to balance your worries about guns at your properties with the regulatory gun licenses that exist. In most situations, requiring licensing and banning guns from common areas will be enough, but you can do a complete ban on guns at your property if you feel that it will be a better long term choice.