A Warning to Landlords About Electronic Lease Agreements

Home / A Warning to Landlords About Electronic Lease Agreements 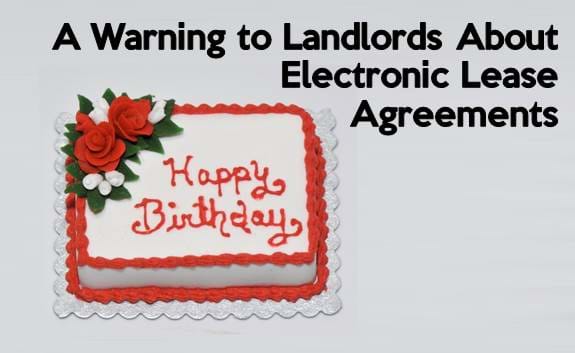 If you are a good landlord, chances are you know your lease agreements like the back of your hand. You’ve avoided the generic online versions and crafted a fine lease document that covers every aspect of your property.
So, do you need to read the lease agreement again after your tenant signs it? There’s at least one landlord who is really regretting that they skipped this step after sending an electronic version of the lease agreement to new tenants, as outlined in this trending news story.

The story unfolds like this: A landlord recently sent the tenants a lease agreement to sign and return. That’s not unusual, but their mistake happened when they sent the lease as a Microsoft Word document. This means that the content of the lease agreement was editable, and either party could make changes to it.
The tenants realized that the lease agreement was in this format, and inserted a new clause before signing and returning it. They had included the following language within clause 16:
“Lessor shall provide birthday cake for Lessee(s) in the weekend closest to their birthdays, which are June 7 and February 17. Vanilla cake is not acceptable.”
The unsuspecting landlord received the altered lease agreement and signed it as well. Once that happened, the tenants shared a picture of the sneaky clause on social media and the story has gone viral with nearly 2 million views as of March 2016.

Is The Lease Agreement Legal?

Of course, there are questions about the legality of the lease agreement because it has been altered from what the landlord originally intended. Although we are not attorneys*, it is interesting to speculate whether or not the tenant’s clause could be enforced.
In contract law, there is a recognized type of mistake—a unilateral mistake—that is frequently made in contracts for goods and services, such as a rental agreement. A unilateral mistake happens when one party is mistaken about the terms or subject matter in the agreement. In other words, if one party understands the contract and the other does not, it might affect the validity of the contract. This could range from a calculation error to a mistake in a timeline that is advantageous for one of the parties, for example.
In some cases, a unilateral mistake actually wouldn’t void out a contract. For example, if the court determined that a reasonable person would be able to see and understand the mistake and signed anyhow, they would most likely uphold the contract. In this case, the landlord is buying cake.
On the other hand, if one party knows about the mistake and the other party was not aware, the court could completely cancel the contract or allow a reformation, where the contract is amended. In this scenario, the landlord would provide a new agreement and the first would be voided.
Some legal experts might point out that the edited lease agreement is an unenforceable contract. Most people are familiar with an unenforceable contract as something happens when one party is too young or mentally diminished, or it is signing under duress or while under the influence. Other ways a contract would be unenforceable might be if the contract was signed while there was misrepresentation about the conditions within, or if something was outrageously unfair or unconscionable. However, none of these conditions really seem to apply to the landlord and the birthday cake clause.
Perhaps the best glimpse into whether or not these tenants can expect cake on their birthdays comes from a contract law concept known as nondisclosure. Nondisclosure within contracts happens when one party neglects to share important information about the agreement. That party’s silence about whether to disclose information about material facts within the contract generally causes the contract to be voided. It seems in this instance that if one party (the tenants) inserted a clause into the lease agreement, they were obligated to share that fact with the other party (the landlord).
On social media, the tenant stated that they were going to try to hold the landlord to the lease agreement that was signed. It remains to be seen whether or not the landlord will comply.

While this is a lighthearted story, it really does underline a more serious issue where landlords can learn a very valuable lesson concerning lease agreements. What if the tenant had changed the rental amount, or deadlines, or something in the pet clause? What if the landlord didn’t notice the important change, signed it, and then tried to enforce something after a few months?
It would be hard for a court to overturn or nullify lease agreements that stated something in black and white and was signed by both parties. It would be equally hard to imagine a court to rule in favor of a landlord who suddenly protests that their signed and dated lease agreement doesn’t actually reflect what he or she really meant.
Of course, the best way to avoid lease agreement additions, inserts and other mischief from the tenants is to never use editable electronic documents. Hard copies or PDF files will eliminate this problem. The other way landlords can always protect themselves is to read every contract thoroughly, no matter how familiar they are with it.
Hopefully in this amusing case, the landlord has learned their lesson and will provide the good-natured tenants with the appropriate reward for teaching them—and other landlords across the country—a very valuable lesson on electronic lease agreements.
*Seriously, we aren’t attorneys. This article is in no way meant to provide legal advice on contracts, lease agreements or other business agreements. If you have serious contract questions, please contact a landlord tenant attorney in your state.